Some commentators took issue with an earlier post of mine in which I referred to people whose brains are all-but nonexistant, but who are still functional people. Here’s a clear example of the phenomenon I described, complete with CT/MRI pictures.  And links to the article about the case in New Scientist and the original story in The Lancet. Just for the record. (Subject pics on left, neurotypical example on right.) 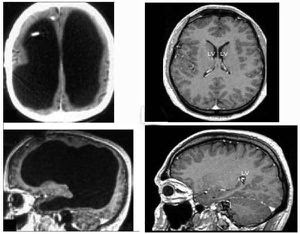 French doctors are puzzling over the case of 44-year-old civil servant who has led a quite normal life – but with an extraordinarily tiny brain .

In a case history published in Saturday’s Lancet, doctors led by Lionel Feuillet of the Hopital de la Timone in Marseille say the father-of-two was admitted to hospital after suffering mild weakness in his left leg.

“The brain itself, meaning the grey matter and white matter, was completely crushed against the sides of the skull,” Feuillet told AFP.

“The images were most unusual… the brain was virtually absent,” he said.

The patient’s medical history showed that at the age of six months, he suffered hydrocephalus, also called water on the brain, and needed an operation to drain this dangerous buildup of spinal fluid.

Neuropsychological testing revealed the man had an IQ of 75, with a verbal IQ of 84 and performance IQ of 70.