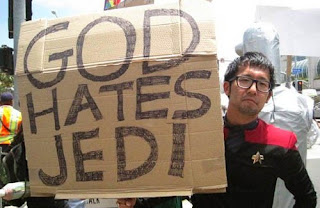 It’s always an odd sensation to discover that a field of interest you’ve passionate about but know is considered fringe at best has been under the scrutiny of academia for some time.

I first learned about the work of Australian sociologist Dr. Adam Possamai from the excellent Theofantastique blog which covers the intersection of religion and cinema. Drawing on the work of Baudrillard, Possamai coined the term ‘hyper-real religion’ to describe the post-modern, syncretic belief systems that have arisen from pop culture. One major example he mentions is Jediism.

I’ve always been drawn to the way people can gain spiritual and mystical perspectives from avowedly fictional works. Some of my most intense moments of gnosis have sprung from certain movies and TV shows. So I’ve no problem at all with this. Others, it is clear, do.

Though plenty of people have been feeling a spiritual connection with Star Wars since 1977, the framing of this into an actual denomination didn’t really come up until the UK census of 2001, where a grass-roots campaign managed to get 390,000 participants to put Jedi as their religion. (This was the first UK census to ask the religion question – it had tick-boxes for the major Judaeo-Christian flavours, Hinduism, ‘None’ and a fill-in box for ‘Other’.) These figures put Jediism into the position of 4th most prevalent faith in the UK, above Judaism, Sikhism and Buddhism, and way above Paganism.

Of course, many if not most of these entries were frankly taking the piss – and the authorities responded, by putting specific codicils into religious protection legislation exempting Jediism (along with another sci-fi faith, Scientology… and Satanism) from discrimination protection in law. Nonetheless…

As I’ve noted elsewhere, the Jedi have made some inroads towards official recognition – as in the case of a Jedi who went into a Job Centre, was asked to lower his hood, refused on religious grounds – and was forced to leave, only to complain and be issued a formal apology for insulting his faith from officialdom. This happened at the same time as a Christian nurse lost her discrimination law suit when she was disciplined for refusing to stow her crucifix when on duty.

It’s census time again here in Blighty. The Jedi are again pushing for inclusion. And there’s a strong push against them… from atheists.

Noted geek pundit Cory Doctorow jokingly tweeted his family might put Jedi on the 2011 census form religion option – he was instantly barraged by aggrieved atheists from the already-extant You Are Not A Jedi campaign, leading to a placating post on Boing Boing – a site which gets more than a few hits.

What interests me about all this – and has been the subject of Possamai’s scholarly-yet-sympathetic gaze – is the question of what defines a religion that must be taken seriously?

Is it longevity? (If so, then most American evangelical faiths are less than a century old, as are neo-paganism, Baha’i and of course Scientology .)

Is it how many of your avowed believers are sincere in their belief? (It’s a criticism getting specifically aimed at Jediism, as noted above – but an awful lot of folk just say they’re Christian or whatever out of habit or societal pressure. How does one measure religious sincerity, exactly?)

Is it the historical evidence of their roots? (That would rule out pretty much all Bible-based beliefs, unless you’re a xtian-biased archaeologist…)

Is it power and influence? (Scientology has forced a position in the US of considerable prestige, but it’s nowhere near as ‘respected’ elsewhere.)

And, most relevantly here – is it knowing the source material is unquestionably, undeniably fictional?

An atheist would make a very sincere case that all religions are based on fiction. Most observers outside of a faith would note that, however ‘real’ its’ roots, all belief systems pick up a bit of fictionalising (mythologising, in the narrow sense) along the way. A Chaos mage working within a hyper-real faith framework would insist it doesn’t matter at all.

So the question is – who decides?

Belief is as personal a thing as there is. And in many, it varies – shifting from knee-jerk to utter belief to doubt. In some, it’s based on a personal mythology taken from life experience and ideas taken from every source, even fiction – the often-maligned “pick and mix” syncreticism. Why exactly do people who claim their faith is unwavering, unquestioned and ineffably (in their minds) true get privileged above those whose faith is fluid, Mercurial? Is it really just because it’s easier to put on a form?

I’m putting Taoist on my census form. It’s pretty close, and allows the possibility that what I believe is only a symbol of the numinous – in short, it leaves room for flexibility, without actually lying. But what about the sincere Jedi – or Na’Vi or Discordian (if there can be such a thing)? Does a religion having an origin in taking the piss out of another religion, or the religious impulse itself, exempt it from being taken seriously? Though the Church of the Flying Spaghetti Monster started as a reductio-ab-absurdam of xtian evolutionary theory, it’s occupying enough mindspace that some, I am sure, are quite sincere when they call for the blessing of His Noodly Appendage. The Church of All Worlds, derived from Heinlein’s Stranger in a Strange Land, has been a feature in SF fandom since the 60s and I’ve been in situations where sharing water became an unquestionably sincere mystical act.

I don’t have all the answers – hell, I’ve barely started to form the right questions. Adam Possamai’s work asks a lot of interesting ones that I’d not considered, and I’ll talk about some of those here later. Next time, I’ll be looking at how the hyper-real faiths can be seen as product, as an offshoot of late-capitalism – and whether or not this makes them (and possibly all modern belief) cargo cults.

The British Humanist Association has tried, unsuccessfully, to have posters about their position re. the census appear at British railway stations. In a piece on the subject at christian.org.uk, the following appeared:

The forthcoming census and the BHA’s campaign were featured on Radio 4’s Sunday programme this week.
Speaking on the programme, BHA chief executive Andrew Copson said the religion question in the census was “aberrantly imprecise” and “wantonly inaccurate.”
He said the results of the census would lead government, both nationally and locally, to make “wrong assumptions” based on “erroneous data” when allocating resources and developing policies.
But a Church of England spokesperson disagreed with his criticism.
Revd Linda Barley, Head of the Church of England’s Research and Statistics Department, said of the religion question: “It’s not about belonging, it’s not about believing, it’s not about practice, or any of those things, it’s about just whether people feel they align themselves with different religious persuasions.”
She went on to say that the kind of more detailed information Andrew Copson was looking for would come from surveys like the British Social Attitudes Survey “to find out what it means on the ground.”
And her comments were backed by Peter Benton, Deputy Director of the 2011 Census.
“There are different concepts that you can measure in relation to religion”, he said, including religious practice, belief and affiliation.
“And when we’ve talked to the people that use the census data”, he added, “the one that matters most to them is religious affiliation”.
He concluded: “we could have chosen to measure some of the narrower aspects but it was a deliberate decision not to.”

If the definition of someone claiming a faith-identity comes down to “whether or not people feel they align themselves with different religious persuasions”, then how does any belief, fiction-based or not, fail to qualify?