Posted here for reference, one of the most important things I ever read in a comic book: the rant on the nature of ‘authenticity’ in music, personality and life from 2007’s Doktor Sleepless issue 5, “Your Imaginary Friend”.

I gave a spoken-word performance of this piece in 2014 at Treadwells as part of my talk ‘Cthulhu, Fiction and Real Magic‘.

(Worth noting that an earlier issue also contains the retelling of Alexandra David-Néel’s tulpa experience, which I discuss in my recent academic paper The Tulpa In The West.)

I was also recently delighted to discover one of the ur-texts for this piece: Faking It: The Quest for Authenticity in Popular Music by Hugh Barker and Yuval Taylor  (ISBN: 9780571226597, which has the Big Bill Broonzy information and a treasury of other tales in this fascinating area. A must-read if any of this interests you.

All rights to this piece remain with writer Warren Ellis, artist Ivan Rodriguez and Avatar Press. 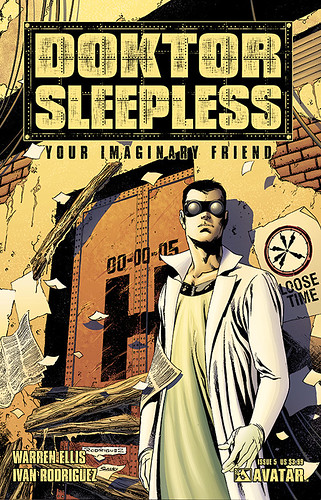 It’s 1991. Richey Manic is carving something into his arm because Steve Lamacq has suggested that The Manic Street Preachers lack an essential authenticity. What’s echoing in the backstage room is the voice of Ian Brown, still saying “Cos it’s 1989.Time to to get real.” In 1999 Godspeed You! Black Emperor start releasing CD’s sleeved in untreated cardboard. Intended or not, it denotes authenticity. Keeping it real. Like brown paper bags from Muji, founded 1980: Full name Mujirushi Ryohin, which means “No Brand, Quality Goods.”
Godspeed You! Black Emperor didn’t play the media game. Half of them were anarchists, and all of them hated the music industry. But of course they had a brand. You can’t help but notice that Naomi’s Klein’s book “No Logo” had a fucking logo on the front. Godspeed’s brand was authenticity. That’s what they had to sell. And if they didn’t sell records and gig tickets, then they were just 12 guys in Montreal eating ramen until they died. Richey Edwards couldn’t be Richey Manic, THAT RICHEY, unless he sold you on the concept that he was 4 real. Ian Brown and the Stone Roses couldn’t be that band, the band of the moment with the authentic voice that turned out to be the band in the right place at the right time and raised everyone up – unless they were more real than you.
Around the turn of the century Justin Timberlake began to carry around with him a group of black vocalists, whose job it apparently was, in live performances, to declare how “real” Justin Timberlake was before he began to sing. In 1938, sharp-dressed bluesman Big Bill Broonzy who’d been tearing up Chicago, played New York for the first time. But a blues guitarist in a good suit brewing up the primal muck of rock n’ roll with drummers and bassmen didn’t seem authentic enough to the Carnegie. So the concert programme described him as a poverty-stricken farmer who “had been prevailed upon to leave his mule and make his very first trek to the big city.” And they had him do acoustic guitar blues on his own. From there to his death twenty years later, he booked pretty much nothing but solo acoustic gigs. Because fake Big Bill Broonzy was deemed the authentic version.
No matter that he pioneered electric instruments in the blues, and was also recording with people like Pete Seeger, who wanted to take an axe to the cables when Dylan went electric in 1965. He changed his story in later years, but he was clearly offended by Dylan’s sudden inauthenticity, that maybe he’d been championing a fake all along. Because no one ever knew, or every one pretended to not know, that Bob Dylan was a fictional person. His authenticity was entirely constructed. Bob Dylan and Superman are the two greatest American myths created in the last century.
Who the hell wants to be real?
In 2006, Bob Dylan’s playing ” The Levee’s Gonna Break” Except the song’s called ” When the Levee Breaks” and it’s by Memphis Minnie. And she’s playing it in 1929, a few years before she moves to Chicago to tear up the town with Bill Broonzy. Who’s Memphis Minnie? One of the other great electric blues pioneers. And her name is actually Lizzie Douglas. And she’s not from Memphis either.
Authenticity? Authenticity is bullshit. Never more so than today. We can be anyone we can imagine being. We can be someone new every day.

You know why Grinders never got any respect in this town?

See if any of these comments are familiar:

‘You should be happy with who you are.’
‘Be yourself’.
‘That stuff is just fake.’
‘Don’t get any ideas above your station.’
‘Take that shit off.’
‘Dress Properly.’
‘Why can’t you be like everyone else?’
Yeah?
We are not real enough. We are not authentic to our society. Free speech does not extend to our own bodies.
But you know what? Back in the days before the internet, a kid called Robert Zimmerman said, “Fuck that, I’m going to be the man I dream of being. I’m going to be someone completely new and write about the end of the world because it’s the only thing worth talking about.” And that was one guy in Minnesota, in the same decade the telecommunications satellite was invented. Imagine what all of us, living here in the future, can achieve.
Be authentic to your dream, be authentic to your own ideas about yourself. Grind away at your own minds and bodies and become your own invention. BE MAD SCIENTISTS.
Here at the end of the world, it’s the only thing worth doing.”